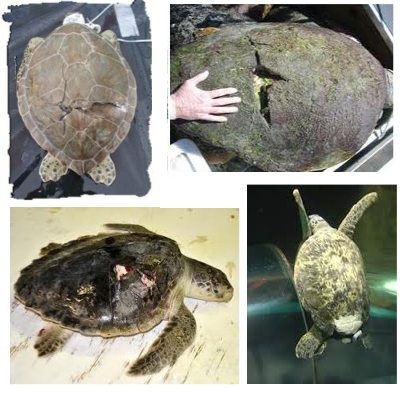 The Problem: Boat strikes are widely acknowledged as a significant threat to fresh and salt water turtles and other marine animals. According to the Sea Turtle Stranding Network, boat strikes have tripled in Florida since 1980. Sea turtles have poor hearing and vision when out of the water, and many times will not notice an approaching boat in time to move to safety. Turtles can be hit when they come to the surface to breathe or when feeding or mating in shallow areas.

Turtles can be injured and sometimes killed by blunt-force trauma from boat impact or propellers. In 2002, the Florida Fish and Wildlife Conservation Commission (FWCC) attributed 79 of 458 (17.2%) leatherback turtle deaths to boat strikes. Turtles that do survive boat impacts may receive scars and lose limbs, and most eventually die from boat-related injuries. From 1980-2002, boat-related injuries accounted for 13.7% of strandings recovered by the Florida Sea Turtle Stranding and Salvage Network. In Georgia in 2012, 43 percent of the sea turtles found dead or injured suffered injuries related to boat strikes, according to the Department of Natural Resources. That is higher than average, which is usually around 25 percent.

Species Affected: All species of turtles can be affected by boat strikes.

The Solution: The FWCC estimates that the number of boats will double along with the human population in Florida from 2006 and 2060. This threat to both saltwater and freshwater turtles will become greater with increased boating activity.

* Sea turtles are extremely active in waters near nesting areas during nesting season, so boaters should take extreme caution during the summer months;

* Be aware of changes in the surface of the water, like swirls that can indicate that a 300-pound loggerhead or one-ton manatee is underwater;

* Slow down over turtle feeding areas such as seagrass beds and coral reefs;

* Boaters who hit a manatee or sea turtle should stay in the area and call the Department of Natural Resources at 800-2-SAVE-ME. Boaters will not be charged if the collision was an accident and they were operating their boat responsibly.

Case Study: In a 2008 Duke University study, researchers used time-depth-recorders to evaluate the risk of boat strikes on loggerhead sea turtles. The study found that loggerhead turtles are most vulnerable to boat strikes between 8 a.m. – 12 p.m. on the day following nesting or a false crawl and on the night before returning to the beach to nest. This is because boating is most notable in the morning, especially during boat races which are usually scheduled around 10 a.m. During this time, turtles are closest to shore and near high traffic boat areas.

The study also found that the “idle” and “no wake” signs in intercoastal waterways do little to protect loggerheads from boat strikes because females rarely frequent intercoastal water. The areas near nesting beaches where female loggerheads do use are usually not part of “idle” or no wake” zones. Increased boating speeds intensify the risk of boat strikes. Florida has large tourism and recreational boating industries, and a program educating people on boating laws and the impacts of boat speeds on turtles could make a big difference in reducing the number of boat strikes on turtles. Read the study here.