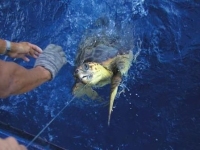 The Problem: Each year, foraging and migrating sea turtles are accidentally captured, injured killed by fishermen using longlines to catch tuna, swordfish, sharks other species. A longline consists of a mainline 40 or more miles long with thousands of additional lines and hooks attached to it. The turtles either eat the bait and get hooked or become entangled in the lines. Some turtles caught on hooks or entangled underwater drown if they cannot get to the surface to breathe while other turtles are severely injured by hooks they have swallowed or which are in their skin. Every year longline fishermen around the world set more than two billion baited hooks. In addition to sea turtles, sea birds, juvenile fish, sharks marine mammals are accidentally caught, injured killed on longlines. 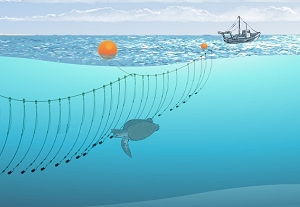 Scientists estimate that thousands of sea turtles are captured around the world by longline hooks every year. Many of these animals die from drowning or from their injuries after release. Most longline fishing occurs in the open ocean (pelagic longlining) in the top 975 feet of water but in some areas, such as the Gulf of Mexico, fishermen also set longlines on the ocean floor (bottom longlining).

As a result of advocacy and legal action by U.S. conservation groups, the United States has become a global leader in reducing the capture of sea turtles and other non-target species in longline fisheries. During the last decade, NOAA Fisheries, sea turtle scientists U.S. fishermen have conducted extensive experiments and significantly reduced encounters with sea turtles. In the Northwest Atlantic interactions with leatherback and loggerhead turtles were reduced by 65 and 90 percent, respectively, by switching from the traditional industry J hook to a larger circle hook (the end of this hook is turned inward). NOAA Fisheries now requires U.S. longline fishermen to use circle hooks, fish bait rather than squid (turtles are very attracted to squid) to carry and use line cutters and other equipment to remove hooks and lines from accidentally captured turtles so that they can be safely released. 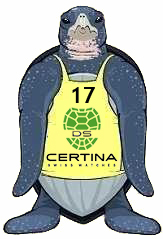