The Problem: Sea turtle nesting beaches around the world have been substantially altered by urbanization and development. Coastal areas are considered prime real estate and many of the world's beaches have been heavily developed. Coastal property owners along beaches threatened by erosion often build armoring structures such as vertical seawalls and sloping rock revetments to help protect their land from erosion. Sea walls can take many forms and be constructed from wood, steel, concrete and even hundred ton ¼-mile long bags of sand known as geotube armoring. Coastal armoring structures such as sea walls on or adjacent to nesting beaches can prevent sea turtles from continuing their life cycles. Sea walls directly threaten sea turtles by reducing or degrading suitable nesting habitat. They block turtles from reaching the upper portion of the beach, causing turtles to nest in less-than-optimal nesting areas lower on the beach where their nests are more susceptible to wave action and more likely to by covered with water. In addition, studies have shown that fewer turtles emerge onto beaches with seawalls than onto adjacent, non-walled, natural beaches. Those turtles that do emerge in front of seawalls often return to the water without nesting, known as a false crawl. While sea turtles naturally false crawl on all nesting beaches, the rate of false crawls is generally significantly higher in front of sea walls. 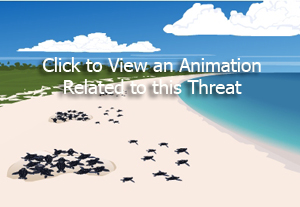 Coastal armoring is intended to prevent sand loss and protect upland structures. However, sea walls literally draw a line in the sand and prevent beaches from naturally migrating inland or recovering naturally after storm events. When they interact with waves they deflect the wave energy back onto the beach in front of or to the sides of the wall, resulting in increased erosion and a lowering of the beach, especially immediately in front of the wall. They also lock up sand on the landward side that would normally be deposited onto an eroded beach.

Sea wall construction is a serious threat to Florida's nesting beaches which host approximately 90% of all the sea turtle nesting in the United States.

The Solution: Beachfront armoring should only be used as a last resort to protect upland structures. Sand placement (dune or beach restoration), elevating structures on pilings, and building farther landward can help alleviate the need for sea walls. When sea walls are constructed they should be located as far landward and off the active nesting beach as possible. Additional studies are needed to further understand how sea walls affect sea turtles and nesting. 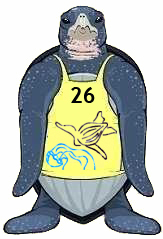