The Problem: The Problem: According to the National Oceanographic and Atmospheric Administration, plastic debris kills an estimated 100,000 marine mammals annually, as well as sea turtles, birds and fishes. Currently, it is estimated that there are 100 million tons of plastic in oceans around the world. It is expected that another 60 billion pounds will be produced this year alone. In some areas, the buildup of plastics is estimated to span 5 million square miles. To put it into perspective, that is the equivalent of the area of the United States plus India. How does that much plastic get into the ocean? Approximately 80 percent of the plastic debris comes from land. It washes out to sea from beaches, streets and highways. It flows out through storm drains into streams and rivers. Most of the debris is recognizable as things we see and use every day. Plastic bags, bottles, balloons, degraded buoys, packaging materials and food wrappers all contribute to the debris. While large plastics are a substantial pollutant, over time these plastics will break down into smaller, more toxic pieces. Not only are these small plastics more easily ingested, but they also act as hosts for invasive species, carrying them to other regions of the ocean. In addition, certain plastic contains toxic additives that are distributed into the water and enter into the food chain. 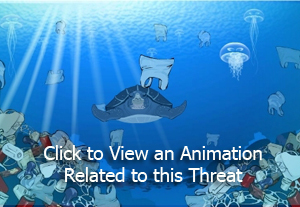 Many turtles that have been killed by consuming debris had plastic bags or fishing lines in their stomachs, some pieces as small as half of a fingernail. Sea turtles are especially susceptible to the effects of consuming marine debris due to their body structure. They have downward facing spines in their throats which prevent the possibility of regurgitation. The plastics get trapped in their stomach, which prevents them from properly swallowing food. Also, many sea turtle rehabilitation facilities commonly deal with "bubble butts," turtles that float as a result of trapped gas caused by harmful decomposition of marine debris inside a turtle's body. The gases cause the turtle to float, which leads to starvation or makes them an easy target for predators. Another threat turtles face with marine debris is entanglement. Usually while entangled, an animal does not have access to a food supply and/or can become badly injured. Marine debris such as fishing line and six-pack rings can cause death by drowning, suffocation, strangulation and starvation.

Case Study: Several studies have been done on large "floating trash continents" in the Earth's oceans. One in the Pacific Ocean is twice the size of Texas. Much of the trash that make up these islands eventually breaks free to wash up in coastal areas or is carried throughout the world by the oceans currents. Researchers estimate that 100,000 marine animals, approximately one million birds, have been killed by marine debris. In the Pacific Ocean alone, plankton, which is a basic food items for many animals, is outnumbered by plastic by six to one!

Cities and countries all over the world are now considering or implementing bans on plastic bags. Canada, Australia, the United States and Europe are all considering bans or other measures to reduce consumption. In Ireland, plastic bags have been taxed since 2002, estimating a reduction in plastic bag use by almost 90 percent. In January 2008, China's State Council put a nationwide ban on plastic bags. The cabinet has demanded all stores go plastic bag-free after June 1. Not only will this reduction have a positive impact on the environment, but it is estimated that it will save China's 37 million barrels of oil.*

Related links:
* National Marine Debris Monitoring Program
* The Life Cycle of a CD or DVD
* EPA's What You Can Do Guide